The inspiration to dance was an old photograph of a one year old boy, who was born 9 years after the end of II World War and who grew up in a village situated near Auschwitz Concentration Camp. By means of Jungian Active Imagination Method and Butoh Dance I impersonated the boy. I created a context-oriented improvised dance that expressed the struggle of a child, whose spontaneous need to play, dance and sing is repressed by the postwar oppression and existential anxiety of the 50s. The butoh dance was performed on request of  befriended artists Agata Waleczek and Jonas Hofrichter in Brühl Palace in Brody Village.

In Kraków I’m taking a taxi.  As we are passing Wawel, I ask the driver about Kaczynski and he tells me about Frank: Hans Michael Frank was  Adolf Hitler‘s personal lawyer. After the invasion of Poland, Frank became Nazi Germany‘s chief jurist in the occupied Poland “General Government” territory. During his tenure throughout World War II, he instituted a reign of terror against the civilian population[1] and became directly involved in the mass murder of Jews. On 2 April 1925 Frank married 29-year-old secretary Brigitte Herbst (25 December 1895 – 9 March 1959) from Forst (Lausitz). Brigitte Frank had a reputation for having a more dominant personality than her husband: after 1939 she called herself “a queen of Poland” (“Königin von Polen”). (Source:Wikipedia)

“Yes! That’s him!” exclaimed the taxi driver. “He resided on Wawel, like he had been a king!” 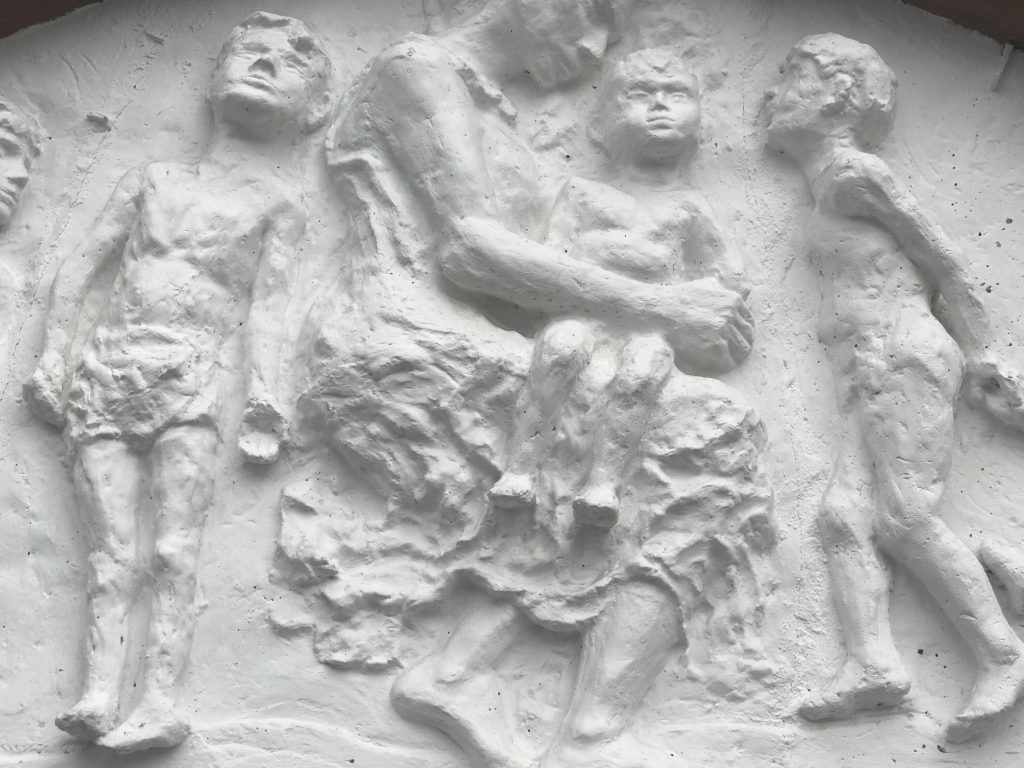 On the way to the cementary I pass by a building of the House of Social Help in Bobrek. It is named after Księżna Ogińska, a former owner of a nearby palace, now abandoned ruines. I’m looking at the sculpture above the entrance and hear handicapped children playing far inside the building. It’s starting to rain heavily.

Even now, after so many years, the Concentration Camp is eerie as the barracks are full of people, so-called “visitors”. I’m “visiting” the exhibition Shoah in Block 27 . There are tiny wall drawings by Jewish children, redrawn by an Israeli artist Michal Rovner.

When I arrived to the Brühl Palace, I thought of the ruins of Księżna Ogińska Palace, where the little boy from photograph used to play. The Palace gathers Polish and German people now, who came on invitation by Agata and Jonas. Among the guests, there was one who caught my attention. He was dressed in an old fashion way, from the War time. I asked about his name and his outfit. He said “I’m Frank”. And then he joked „I travel in time”. On Sunday at 4:30 p.m. all guests gathered in front of the palace ruins. It was the time for a symbolic enactment, a healing ritual. I invited a Woman (Agata), a Man (Jonas), a Photographer (Anna) and a Time Traveller (Frank). I gave the photograph to the audience and started my dance.

My body was scared and traumatized, it didn’t have much space, I felt. There was so much fear all around and so much pain. There was also a very anxious sound, like a factory or like a huge engine. I felt somebody was looking at me, it was a strict and harsh look, unforgiving and merciless. I couldn’t move freely, like I was in prison or tied up. I was just an innocent child, I wanted to dance and sing, just like birds and wind and trees. So I cried inside.

Then I felt like the sun got out. I stopped crying and heard birds tweeting and leaves rustling… I was still exhausted and handicapped, but I played with with these little birds, butterflies and insects. Then I felt a strong wind blowing. It brought a change so I danced with it. Suddenly, I realized the disturbing rumbling was gone. It was quiet and peaceful again, but strangely empty. I could feel my legs again, weak but I could walk and feel the ground under my feet. And I really wanted to touch it, I really wanted that my legs are strong and rooted.

“Ania”. I heard Jonas. “The End” said Agata. I stopped dancing, put my left hand on my heart and my right hand on my center. Frank took the blind fold off and I opened my eyes. I was in the Brühl Palace with the other guests again.